Life Views from a Small Place on the Internet 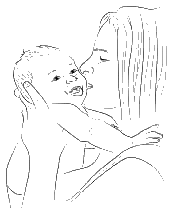 While reading Anne Brontë’s Agnes Grey yesterday, I came across the following sentence, spoken by the protagonist while attempting to put an unruly child to bed:

“In my childhood I could not imagine a more afflictive punishment than for my mother to refuse to kiss me at night: the very idea was terrible.”

The statement startled me, partly because Mother’s Day is this weekend, and partly because the words brought back long-forgotten memories of my own dear mother, gone these 13 years, and the nightly kisses she always gave me as I went to bed each night. Whether I had been good or bad that day, whether I had caused mischief or not, after the lights were out and I was snuggled under my blankets, she would quietly sit on my bed and kiss my forehead. Every night.

These nightly kisses I took for granted. Indeed, I expected them. Her nightly kisses marked the end of the day. She stopped this practice when I reached my mid-teens, and I can only guess that was a difficult decision, acknowledging that her child no longer should be dependent on his mother’s love to protect him. I know, when our own son still lived at home, how difficult it was for my dear wife and me to relinquish some parental love gestures for fear of embarrassing him. Looking back, I missed Mom’s gentle, unspoken, kisses.

Later, as I became a teenager, I recall my resistance to being seen with her in public. I was ‘grown up’ and could drive myself and go shopping by myself. Although a predictable phase for teenagers, I’m sure it hurt her to see her child moving away from her. Despite my resistance, when I needed help, it was to her I first turned for help. When I wanted to get my driver’s license, it was Mom who helped and who escorted me to the test; when my high school closed and I need to find another school, it was Mom who made the phone calls and arranged the interviews to secure a spot for me; when I didn’t know how to get into a college, it was Mom, who had only graduated from high school, who guided me to college interviews and my eventual acceptance.

Years would pass. After my marriage, and living many miles apart, we had difficulties, difficulties that I didn’t grasp fully at the time, and our relationship became distant and fragile for several decades. Fortunately, in her final years, we found space for both of us.

Regrettably, we cannot relive and correct the difficulties of our youth and show the love to our family that we so wish we could now do. So, as Mother’s Day comes each year, I think fondly of her and of the important role of mothers in our lives—but I could have done better as her son. My redemption is in seeing the joyful love our son shows for my wife, his mother. Their togetherness and their sharing of the little, but vital, elements of their lives comforts me—I look back and wish I had done the same. I continue to work on myself. Happy Mother’s Day.